How the d.light D30 Led to Improved Revenue for a Kenyan Businesswoman 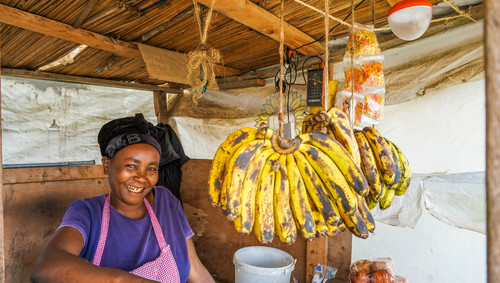 Margaret Muchina is soft spoken. Her mild temperament extends to the way she serves her customers. She slowly lifts the lid off a container that contains githeri, a common Kenyan meal made from a mixture of maize and legumes, most commonly, beans, boiled before spices and other condiments are added. It is a favorite for Kenya’s casual workers because, not only does it fill you up quite well, it also keeps you going for much longer than most meals. It is also easy to consume, mostly accompanied by avocado, a fruit that is almost attaining cult status on the Kenyan websphere. Several people confess to eating avocado alongside all their meals, including meat-based ones.

Muchina adds some soup and hands it over to a young man in a guard’s uniform. He is holding an avocado. Not a beat goes by before she is mobbed by several men who just came off a truck that had just then stopped by the roadside. Most of them go ahead to order githeri, which explains the generous portion she had cooked. All along, she takes breaks to sell groceries to several people as well.  “It is also like this in the evening, sometimes more than this”, she tells dlight staff who had paid her a follow up visit.

Margaret runs a grocer’s and food kiosk in the South Lake, Naivasha.  The area is home to lodges and hotels whose ratings start from three stars. It is also home to large scale farms and ranches. A big chunk of her customer pool is drawn from these establishments’ workforce. Due to the nature of their work, most of them prefer patronizing kiosks like Margaret’s. They are fairly priced and sell what they exactly need for their day to day life. No fancy things. At the end of their work day, they pass by for a bite, or for groceries. Some leave work late, past seven PM.

Margaret used to sell for only a few minutes after dusk, up to 7.30 PM. Lack of an adequate and reliable lighting source basically made it impossible for her to operate past that. During those minutes, she used the spotlight from her phone for lighting. That meant that she could only see a small area of her working place, which opened her up to potential damage of her groceries, or spilling of the already prepared food.  To minimize that, she left before it became darker, denying herself an opportunity to move sell more volumes in a day subsequently increasing her revenues. It also meant she left her customers, who already had fewer alternatives, with a diminishing pool of options.

However, all these changed in November, last year, when she came into contact with d.light’s Solar Home System that we affectionately refer to as the D30. More interesting is the fact that she got it through a guard at one of the nearby lodges who also works as a d.light sales agent. Not only is the D30 ideal as a reliable home lighting system, it also has a higher capacity and is portable. Margaret uses the D30 at home, however, every morning, she carries one bulb and the battery to her stall and uses it for lighting when darkness sets in.

“Now that I have d.light’s D30, I sell for two hours or two and half hours more than I did before.” say Margaret.

As a result, her daily revenues have gone up by 30%.  “Most of my customers now find me in the evening. And, they are many. So I sell more now,” Says Margaret. This case where customers’ incomes go up once they get a d.light Solar Home System is not just unique to Margaret. A study conducted in Kenya by d.light found that 56% of customers who used their Solar Home Systems for income generation had seen a 50% increase in their income.

But acquiring the D30, Margaret relied on the spotlight on her phone to light up her stand after dusk. However, that is no longer the case.

“I also no longer use my phone to light the shop. Nor do I use it on my way home.” When walking home, Margaret instead uses a torch that comes with the D30 as her portable source of light.